Share on facebook
Share on twitter
Share on whatsapp
Share on linkedin
Share on email
Cahir Healy is one of the finest dual players the club and county has ever produced. Known for his skill, dedication and strength Cahir was a phenomenal servant to the Town even commuting back from London weekly to line out for the club.
Here he answers a few questions in the 2016 book “C’mon The Town Portlaoise G.A.A. 1887 -2016“
What were your first memories of Portlaoise GAA? My first memory is of my mother bringing me down to Fr Browne Avenue on a Sunday morning when I was seven. Back then the Sundays alternated, football one Sunday, hurling the next for the juveniles. I remember Joe Phelan senior giving me my first hurl and helmet the following Sunday morning for the hurling training.

Early heroes? The Laois minor football teams from ‘95 – ‘98 were great and inspiring and undoubtedly for me, my heroes.Back then there was huge numbers of juveniles and we regularly played street leagues which were brilliant. The teams and photos would be in the Leinster Express. I never won a thing in those leagues. I found about six shield runner up medals in a shoebox recently but they were super times and memories. Barry Fitzgerald and Peter McNulty were the best lads around my age then and it always seemed to be one of them winning those leagues. I thought I struck gold one year getting picked on Barry’s team and we still lost in the semi-final.

Unsung heroes? Growing up in the Town were the hurling team of ‘98 that won the county final. Niall Rigney, Teddy Fennelly, Cyril Duggan, Speed Bohane, Joe Phelan, Des Killeen etc. I was a goalie back then and I followed John Hanniffy the whole way to the dressing room begging him for one of his hurls. The b****x wouldn’t give me one!! For years after I told my mother our training would finish until half eight so I could stay late and watch the senior hurlers train under Cheddar. Some of my influences are too many to name, John Bohane a town legend trained my underage hurling teams and Pat Ryan and Jim McManus were usually in charge of the football. When I came on the senior hurling panel at 15, Teddy Fennelly was very good to me and went far and beyond the call of duty collecting for every training and game, bringing me to watch the senior footballers even. Kevin Fitzpatrick and Michael Nolan did the same for me a few years later when I got on the senior football panel. I realise and appreciate what they did for me now more than I did then.

Best players down through the years? I’ve been lucky enough to play with some of the town’s greatest. Niall Rigney and Cyril Duggan were older than time when I started but they were still brilliant. Tommy Fitzgerald was the best hurler I played with, could do it all and is the ultimate team player. Joe Phelan, Eoin Browne, Noel Costelloe to name a few were some of the excellent hurlers I played with. I’ve played through a fairly successful time with the footballers, so it’s hard to pick out just a few. Kevin Fitz, Bruno McCormack were two of the best, Mickey Nolan is a great. So many times I had held my man scoreless only because he had saved a shot or two at point blank range from my man. Wooly Parkinson for producing the goods in county finals was another brilliant player. Peter McNulty, Barry Fitzgerald and Craig Rogers were some more suprememly talented footballers I played with too. Aidan Fennelly was a super defender. Eoin Bland too. I got to play against some good players too. Colm Kelly from Stradbally and Donie Brennan from Arles Killeen are two players you always needed to be tuned in to stand half a chance. Assassins. Diarmuid Connolly and Bernard Brogan two of the best I marked at county level. In hurling Damien Hayes, savage pace and fitness, it was very tough trying to keep up with him.
Funny memories? Colm Parkinson telling Karl Lenihan upon being dropped that “his brains must have fallen out his big nose.” Tom Prendergast motivating us for the ‘07 county final with the words – the pints will taste sweeter on the Monday if we win. John Bohane saw I was using a hurl with no bands once after I mis-struck a ball. He took it from me and fired it in the ditch in St. Fintan’s field and told me I wouldn’t stir tea with it! Someone took a scissors to Teddy Fennelly’s runners one time in the dressing room. It was hilarious during a team meeting to watch him tie his laces and see them come apart in his hands.

Disappointments? Losing five county hurling finals and not winning a second final. Particularly as I was involved in some key moments in those games and they turned it against us. I haven’t given up the dream of winning another one yet though. Another one was losing the All-Ireland club final in ‘05. Eleven years later we are still trying to get back.

Greatest memories? Definitly winning the senior double in ‘04. It has only been done six times in the club’s history so to be part of one of them was special. Was a brilliant run. We must have played 10/11 weeks in a row in the championships in football and hurling. It was a great time. The run to the All-Ireland club final in ‘05 stands out. Some of the nights in the clubhouse after it where we literally hung from the rafter in the bar were great.

Hopes for the future? On a personal level, win another senior hurling title and another Leinster club football title. On a club level, that we can develop and strengthen our underage and get a stronger presence in the town schools, that we establish the club as a focal point in the community and town and that it be as well supported as in days gone by 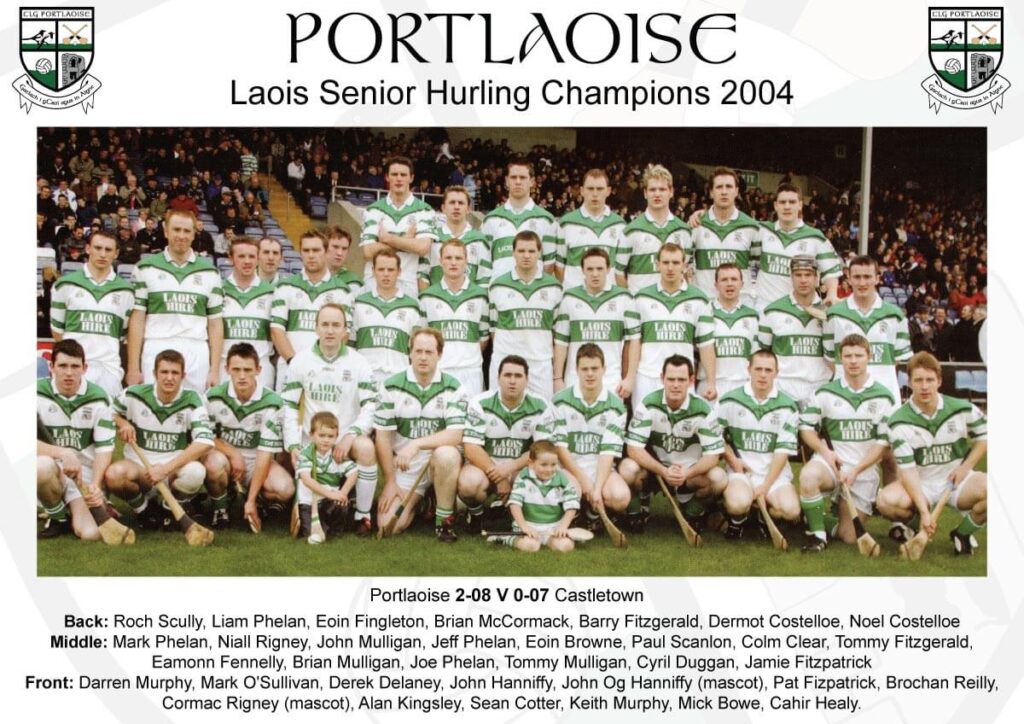 Paddy Brennan is a legendary figure in the Portlaoise club.
He won minor hurling championships with the Rovers Club
and when that club merged with Portlaoise in the early 1950s,
Paddy threw in his lot with the Town. He went on to star with
his club and also in the blue and white of Laois for many
years.

An edited version of a poem attributed to “Little Sport”, which was contributed along with other items by a lifetime Portlaoise supporter living in Dublin, Joe Scully, formerly from Borris Road, who hails from a family steeped in the “Town” GAA tradition.

Teddy Fennelly Snr describes his personal journey to the clubs first Senior title in 57 years in 1964.