Share on facebook
Share on twitter
Share on whatsapp
Share on linkedin
Share on email
Colm Browne, distinguished himself as an all-round top-class footballer and a very accomplished competitor in both defence and attacking departments.
In his under age and early adult years he helped Portlaoise win many titles as a forward but in a famous All-Ireland club semi-final against the mighty Austin Stacks from Kerry, he was selected at centre half back and impressed so much he played most of his subsequent football as a defender. In his beloved Portlaoise jersey he won ten senior county titles, four Leinster club titles, four under 21s, two Minor Medals and he also reached the Holy Grail of Club Football when he played and trained The Town to win the All Ireland club Final in 1983 defeating Roscommon’s Clan na Gael in the Final.
He starred with Laois and Leinster teams for a long period and won three Railway Cup medals and had the great honour of captaining Laois to a National League title in 1986. He also represented Ireland in the Compromise Rules Series.
His performances during this period brought a lot of national recognition of the stylish wing back earning him an All Star in 1985. He played on an All Star team including players such as Pat Spillane, Charlie Nelligan, Mike Sheehy and Mick Lyons.
When Colm finished playing his training skills were further recognised when he was asked to take on the managerial role of the Laois Senior Football team in 1994 spending three years in charge. He spent a period with Tipperary bringing lots of improvement to the Premier footballers.
In 2001 Laois came calling again and he didn’t shirk from the responsibility of a second stint with Laois seniors. He brought the O’Moore County into Division One in 2002.
The esteem that Colm is held in Laois was evidenced when he was selected on the Laois team of the Millennium. On that team he was joined by fellow Portlaoise player from the 1964 three in a row team, Goalkeeper, Paddy Bracken and All-Ireland team mates Eamon Whelan and Tom Prendergast.
In 2013 he had the distinction of being selected on the team of the Eighties of the greatest players never to win an All Ireland medal.
What were your first memories of Portlaoise GAA?
My first memories were of seeing the senior football team win the three-in-a-row in ’66, ’67 and ’68, and of training in St Fintan’s Hospital grounds with the CBS U-12 team which was, in effect, the club’s U-12 team.
Early heroes?
Brian and Paschal Delaney, Teddy Fennelly and John Fennell always stood out to me as being great players.
Unsung heroes?
Mick Dooley; although he wasn’t an unsung hero to anyone who played with him – he was a brilliant footballer. Also, during my time playing I thought that the level of commitment shown to the footballers by players whose first love was hurling – Pat Critchley, John and Billy Bohane, Jimmy Harding, John Taylor, Cyril Duggan and Niall Rigney among others – was exceptional. All the players on the team that won the club’s first Leinster SF title in 1971/72, and in the process coming from eleven points down, are heroes. They left a great legacy.
Best players down through the years?
Of the players with whom I played I’d rate Eamon Whelan, Tom Prendergast and Gerry Browne as the best – club or county. A number of the current crop of senior footballers are also exceptionally talented and committed, and their achievement in winning so many Laois SF titles in a row is a fantastic achievement. They’ve an unbreakable spirit and have brought great credit on the club. I’d love to see them achieve their ambitions of winning Leinster and All-Ireland championships.
Characters?
‘Jazz’ Reilly comes to mind; his analysis of players’ performances during or after games was always very direct, and often very funny – though he didn’t mean it to be. But he spoke from the heart and no player ever fell out with him. Memories of underage Training in St Fintan’s Hospital, on the Mountmellick Road next to Dunnes Stores, on the ‘front’ (now Parkside) and ‘back’ (later to become the club grounds) pitches at O’Moore Park. Also, there were no leagues then; we played only championship matches and practice matches in preparation for the championship; you were only guaranteed one championship match in any year. Another very vivid memory is that of Bill Phelan’s Volkswagen Beetle being stuffed to the gills with players on the way to a match in some part of the county.
Biggest influences?
Bill Phelan was undoubtedly the biggest influence on players of my generation. He brought enormous passion, energy and commitment to his management of club’s teams, and players had great respect for him. Highlight of club career Winning the All-Ireland club championship was special, but there were many great occasions with the club. Every championship we won and every game we won along the way was a highlight at the time. The atmosphere among players and supporters, especially for games in the provincial and AllIreland series was always very special.
Biggest disappointment?
Not having won at least one more All-Ireland SF club championship. Also, that the hurlers who had shown such great commitment to the football team fell agonisingly short of claiming a Leinster club SH in the same year as the footballers won the SF title (1987).
What would your aspirations be for the club in 20 years’ time?
I’d hope that we can continue to produce great players who have the ‘never say die’ spirit that the club has built such a tradition for, and that, no matter what other developments take place, playing games and trying to win championships continue to be the top priorities.
What does Portlaoise GAA mean to you?
It means being privileged to have played with such a great club, on teams and with players that had something special about them, on and off the field. And it’s great that we still have such teams and players in the club. 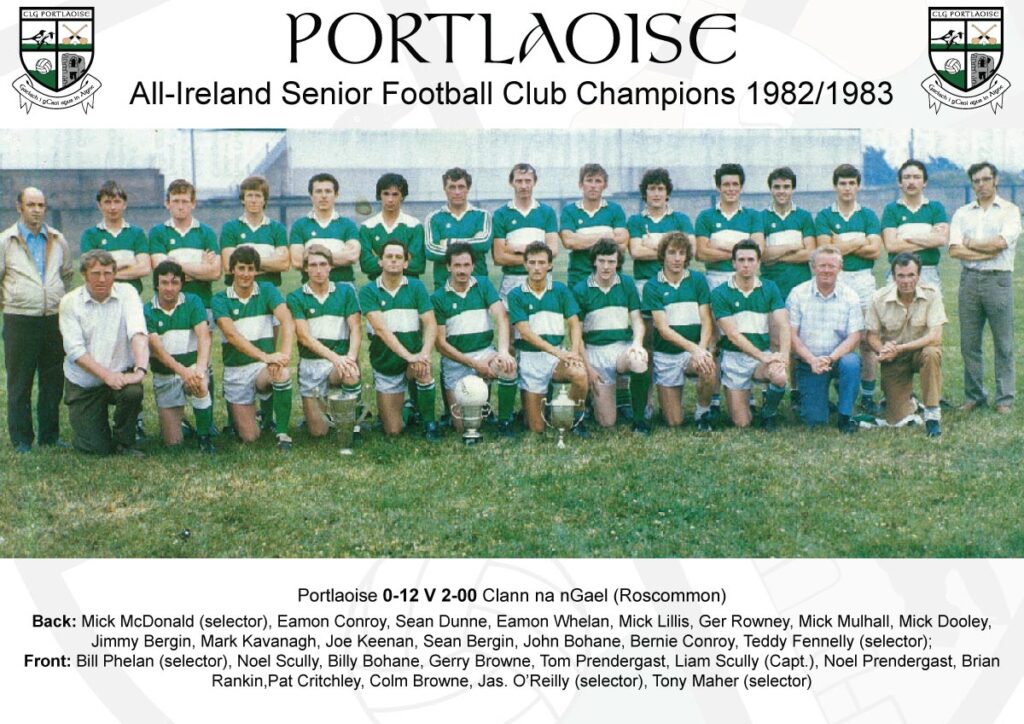 Aisling Saunders has come up through the underage ranks of Portlaoise Ladies Gaelic Football to become the co captain of the first Portlaoise team to win the Laois Senior Ladies Football Championship in 2020.

Tom Flynn pays tribute to the men of 1964 who won the Laois football title for the first time in 57 years.