Tom Prendergast was inducted into the Laois GAA Hall of Fame for 2021.

Tom – affectionately known to us all as ‘Curly’ – is without doubt one of the finest players Portlaoise and Laois has ever seen.

Tom was a player that electrified the crowd every time he got the ball.

The older stock in the club can still vividly recall the two goals he scored against the famed Austin Stacks in the 1977 All-Ireland Club Semi- final in O’Moore Park.

His highlights reel is beyond compare in our club for his scoring exploits. He had speed, strength, intelligence, and what beautiful balance and skill as a player. As Jimmy Magee would say ‘different class’.

What a pity there isn’t more video archive available of him in action for our younger players to see and to appreciate. Instead they must make do with the memories of those lucky enough to have seen him in action.

First Memories
Going to 1964 football county final with my father. I was only 8 years old but I can remember the excitement/banter on the pitch after the win.
Early Heroes
Pascal Delaney, Brian Delaney, Paddy ‘Scratchie’ Doyle, Cyril O Meara, Tom Walsh, Teddy Fennelly Snr, Tom ‘Toomey’ O Reilly, Mick ‘The Rake’ McDonald, John Fennell.
Unsung Heroes
The officers/committee who kept the faith and strove to keep the club alive when the club was at junior level. They all ‘hung tough’ and the club developed and grew through the years. The different officers/committees in turn over the years drove on the club and brought it through the transitions that were needed so that the club would flourish and move forward. Volunteerism within the club has and continues to be fantastic – this was proven very much in recent years when our move to our new grounds in Rathleague was in jeopardy. The club fought the fight and won.
Characters
Billy Bohane (Snr), Paddy Critchley, the one and only Jas Reilly and Paddy Fitzpatrick – great men. Bill Phelan, Bill Murphy, Owen Deegan, Mick ‘the Doc’ Fitzpatrick.
Memories at Underage Level
When I played at underage level I was very lucky to have played at a time when there were great lads coming through with me. We won at every level underage and then went on to play together at senior level. Biggest Influences My father, Bro Beausang, Bro Somers, Bill Phelan, Jack Delaney, Tom Daly, Billy Bohane Snr, Paddy Critchley and all ‘the mothers’ who were always there to support and encourage us.
Highlight of Club career
Without doubt winning the All-Ireland Club title in 1983. Huge achievement and won it with all the lads who had played from underage up with me. Great times and great memories!
Best Players throughout the years
During my time playing at senior level ‘Atch’ Whelan – a man that could play in any position, marvellous fielder, an all-round marvellous footballer. Colm Browne – a great leader/captain and motivator, his brother Gerry pound for pound tough as teak. Mick ‘the Gorta’ Dooley – Mick had a phenomenal work rate. Liam Scully – captain of the All-Ireland club team of 83 – quality footballer and great team-mate. Mick Lillis – Cooraclare’s loss was Portlaoise’s gain. Mick was a tough footballer and had fantastic pace and vision. Last but not least my brother Noel who was a very small and skilful and talented footballer and we worked well together throughout those great years in the 70s and 80s.
Biggest disappointment
That the club did not win at least one more All Ireland when we were at our peak (early 80s) – we had succeeded in winning 4 Leinster Titles.
Aspirations for the club in 20 years time
That the club will develop/grow as a vibrant sporting/social outlet for the greater community of Portlaoise. That football, hurling, camogie will continue to be nurtured/fostered in a sporting and positive manner Encouraging young people to become involved and enjoy being part of ‘team sport’. Fantastic work being done at juvenile level and long may it continue to embrace young boys and girls. Great to see the ladies section of the club doing so well and here’s to its continued success in the future.
What does Portlaoise Club mean to me
Best answer to this is that Portlaoise Club is part of my DNA. It has always been part of my life. It’s a great community – one big family within the wider community of Portlaoise town. The club has always been and continues to be supportive to everyone within whatever way possible – both on and off the field of play. I personally will always be grateful for the Portlaoise GAA club for the huge support, friendship, generosity and genuine goodwill shown to Antoinette, Sarah and I and our extended family when our beloved Kate died in July 1995. The ‘Club Family’ stood by us in no small way to cope with a very difficult and stressful time in our lives. A big thank you to everybody. The club is about sport but friendship, loyalty, determination and solidarity are the core values which make Portlaoise GAA club what it is today. C’mon the Town! 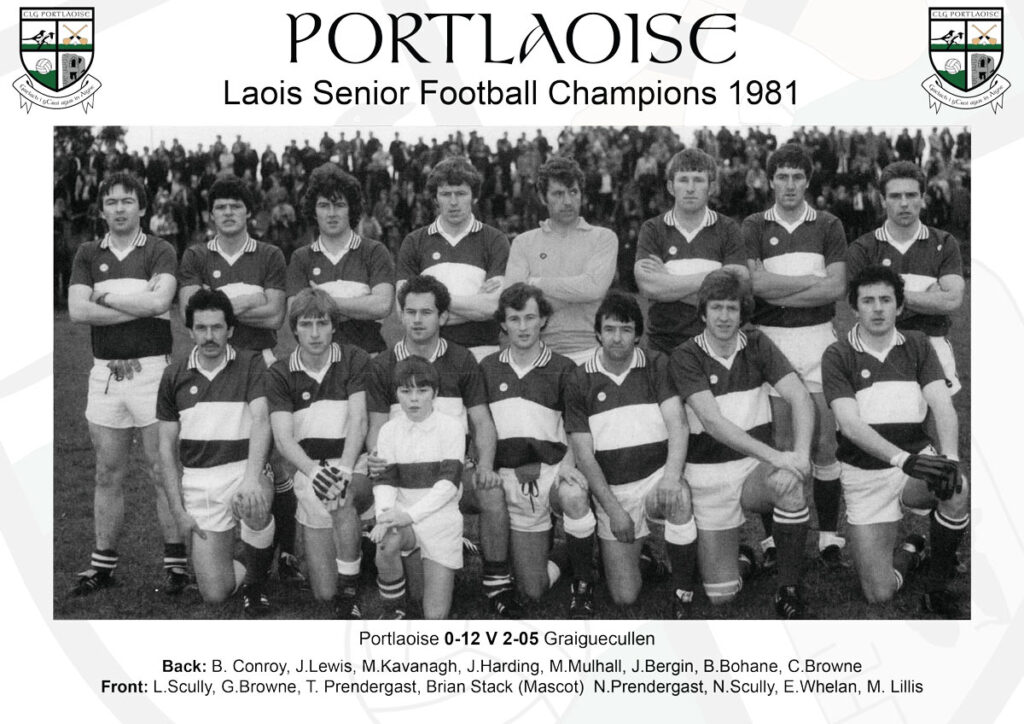 Portlaoise GAA is fortunate to have in its ranks many inspirational figures over its long history. None more so that Fr. Matt Walsh, Life President of the club for thirty years until his unexpected death at his home at Lower Beladd on 30 October 1995.

On the 13th August 1999 the club lost another valued member with the death of Tom Bergin.
Tom who played most of his hurling with Clonad joined Portlaoise when he moved to live in the town.

If there was any one player who symbolised the never-say-die spirit that inspired Portlaoise to become one of the country’s top GAA Clubs in the 1960s and early ‘70s is has to be Pascal Delaney, know to friend and foe alike as “The Red Lad”.