The Game That Changed History

After fifty seven years, Portlaoise finally regained the championship trophy with a narrow victory over Graiguecullen, 1 – 5 to 0 – 7, the first title in the grade since 1907. The half forward line registered all the team’s scores, with James (Jas.) O’Reilly scoring the vital goal. The score line remained low due to the solidity of both defences. There was great praise for John Fennell, who played despite having sustained a leg injury in a recent hurling match. Inevitably he scored the winning point. His total tally in the earlier rounds came to 6-3. What a performance!

This was Portlaoise’s year. Frustrated in recent years by the hand of fate, there was no way the “Town” was coming out of this one empty-handed as had happened so often in grim encounters on and off the field, They had an incredible 12-20 to spare over their opponents in the three qualifying games and simply oozed class all through the team. But was the dreaded “hoodoo” to strike again.

When that great warrior, Pascal Delaney, was the recipient of an undeserved red card the previous Sunday in the All-Ireland Under 21 football final (against Kerry) at Croke Park, it ruled him out of the final he did not want to miss. The club and the team were rightly upset that they had been denied his services for what everyone knew was the biggest day in the club’s history.

But each player gave that little extra and every effort was needed to subdue this powerful squad from the Carlow borders. Jim Hughes was a tower of strength at midfield and played a captain’s role. Teddy Fennelly, at centre-half back, was pitted against Dinny Byrne and later Mick Fennell, and cut out Graigue’s main threats while the mighty Alfie Lewis was invincible at full back and Paddy Bracken unbeatable in goal.

It was a game full of grit and determination all over the park and right through the exciting hour. It went one way and then the other before the referee finally called it a day – Portlaoise’s day – the day that changed the history of Portlaoise GAA club. Ever since that fateful day the “Town” has dominated the county football scene and captured seven Leinster club titles into the bargain.

Portlaoise was first to score with a point from a free from Fennell. Graigue led by 0-3 to 0-1 at the end of the first quarter. But then Jas. O’Reilly’s goal had the “Town” leading at half- time by 1-3 to 0-4. Graigue, however, were back in the driving seat at the end of the third quarter but back came Portlaoise again to pip their brave opponents by a single point.

The match was played on the 25th of October before 4,000 attendance.

In the opening round, Portlaoise defeated Killeshin in a stroll by 4-9 to 0-1. The quarter-final was another walk in the park, resulting in victory over Annanough by 4-8 to 0-1. In the semi- final Portlaoise had a comfortable victory over Ballylinan by 5-9 to 1-6 after leading 2-6 to 1-4 at half-time.
Portlaoise: Paddy Bracken, Mick Murphy, Alfie Lewis, Tom Byrne, Pat Dalton, Teddy Fennelly, Syd Harkin, Jim Hughes, Mick McDonald, John Fennell, Syd Lewis, Mick Dalton, Cyril O’Meara, James O’Reilly, Mick O’Reilly. 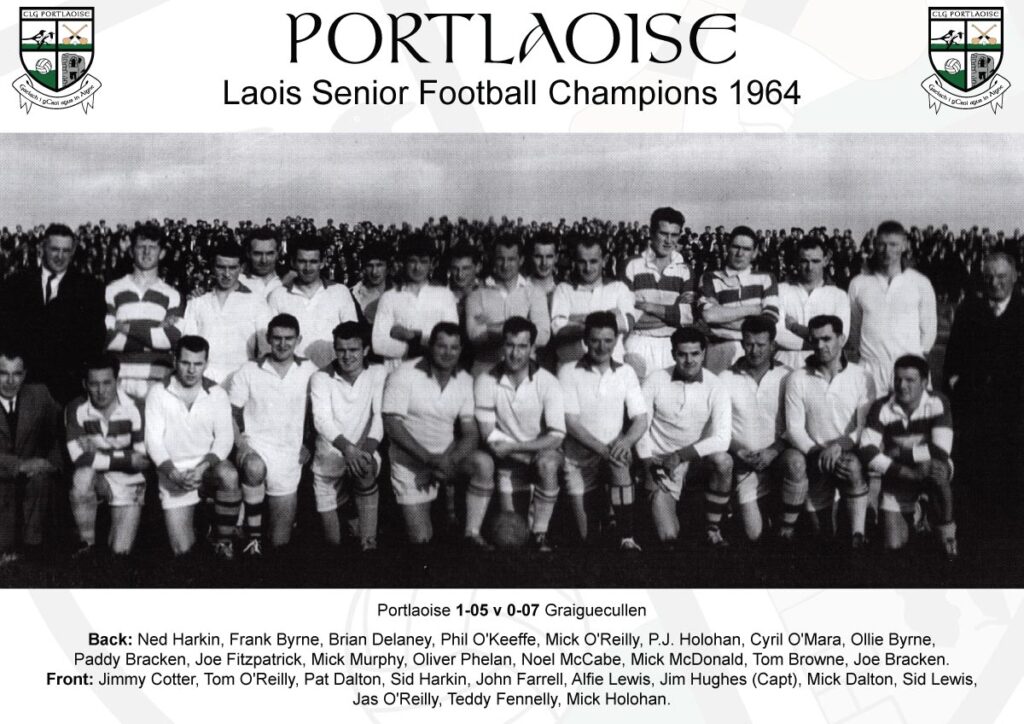 PrevPreviousThe Magpies
NextTom Flynn Pays Tribute to the Men of 64Next

Brian Stack was an active member and great supporter of Portlaoise GAA club all his life. He played football and hurling up to and including senior level and was a well-known inter-county referee.