Share on facebook
Share on twitter
Share on whatsapp
Share on linkedin
Share on email
The Magpies
– minor football champions of 1951
In the very early stages Kilminchy set the pace but found “Town” defenders a tough backline to face;
Then Rocky Scully gathered and the ball he did clear as the park erupted in a great Portlaoise cheer.
As the ball descended, Sonny Brown he jumped high and with a nice tip from his boot sent the ball to Conroy.
It was a lightning move and the forwards were all set when the “Joxer” Fitzpatrick soon rattled the net.
Then back came Kilminchy in a matter of a twink, and the Magpie wearers had little time to think. Larkin headed goalwards and young Rankin was there and soon the umpire had the green flag in the air.
Kilminchy were now playing as champions can play and their supporters believed that they’d win the day.
They held a slight edge as the half-time whistle blew, but there was another half to play as everybody knew.
On the restart it seemed that the Magpies would tire and they looked like a team that was stuck in the mire.
Kilminchy kept pressing and looking the best, but the “Magpies” backline proved well up to the test;
Muldowney kept clearing ball after ball, he was playing the part of a solid stone wall.
The “Magpies” fought back with a desperate raid the ref looked at his watch and little time to be played,
Then Campion was fouled and Paddy Bracken scored the free
Which sent the “Magpies” on a fine scoring spree.
So here’s to the boys for a day’s work well done, the “Magpies” are back and the battle is won.
An edited version of a poem attributed to “Little Sport”, which was contributed along with other items by a lifetime Portlaoise supporter living in Dublin, Joe Scully, formerly from Borris Road, who hails from a family steeped in the “Town” GAA tradition. 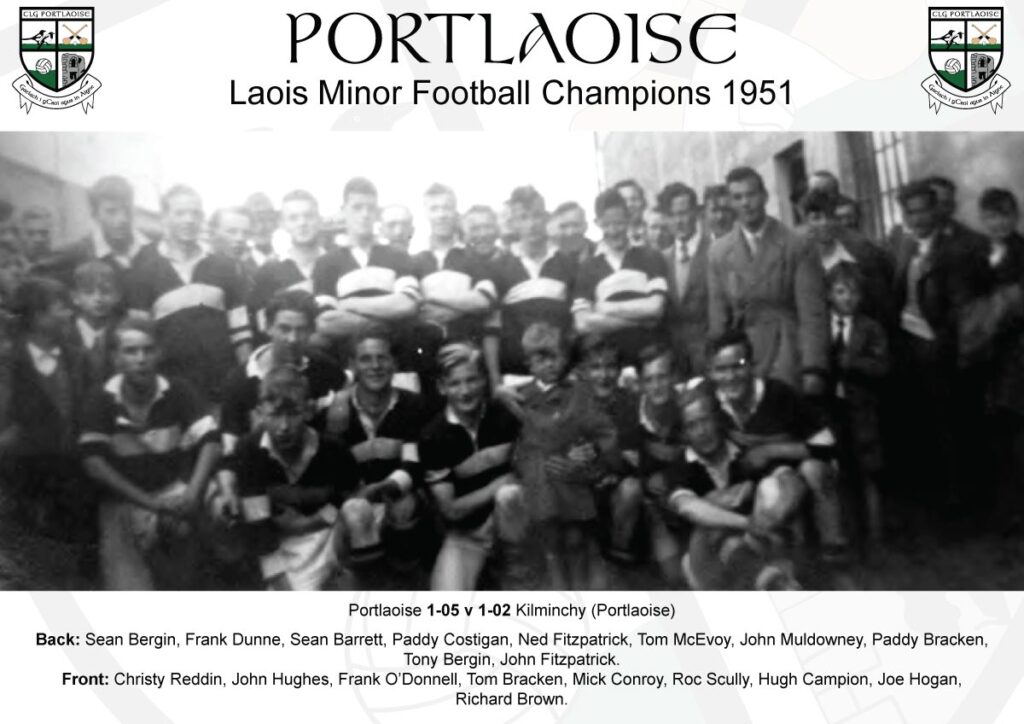 Tom Flynn Pays Tribute to the Men of 66

Tom Flynn pays tribute to the men of 1966 who brought the county title back to the Town.

“Portlaoise GAA in Turmoil” – This was a front page headline no club would wish to see in their local paper.

Laura Bergin has the honour of being the clubs first lady officer.